You are here: Home / Environmental health / A genetic change in the dengue virus? 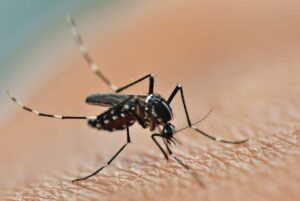 City doctors in Jaipur have noted a trend of dengue fever cases being reported during the summer months. Does could point towards a genetic change in the dengue virus?

Dengue fever cases typically reach peak levels during and after the monsoon season, as the cooler and wetter conditions present Ideal conditions for the virus’s mosquito hosts to thrive. However, doctors are noting that unusually high numbers of dengue fever cases have been reported across May and into June.

“It is quite unusual that dengue cases are reported in the hospital in May and June,” said Dr CL Nawal, senior professor and head of the department of medicine at SMS Hospital. “There must be some change in strain of dengue virus since it is unusual to report such cases even in summers.”

The possibility of the virus mutating to a different serotype (strain of virus) is a potential explanation for the unusually high number of cases this year. However, there are alternative answers.

The spread of the virus is entirely dependent on its host – the Aedes aegypti or yellow fever mosquito. These mosquitoes favour humid conditions with ample areas of stagnant water for in order to breed. It is for this reason that cases rise in the later months of the year after significant rainfall. However, if enough stagnant water is found within a city, a breeding population may still exist.

The claim stems from a comparison to the corresponding period last year, where there were less than 80 cases of dengue reported between January and May. This year, at least 225 patients have already been admitted to the SMS Hospital for treatment of dengue.

“Jumping to the conclusion of a new strain…seems drastic”

These figures, though technically nearly triple those seen the year before, are still within reasonable variation levels. Cases at this time of year are not entirely unheard of. Jumping to the conclusion of a new strain, therefore, seems drastic.

Such a figure could be explained by a breeding population of mosquitoes being present in a built-up area due to, for example, stagnant water in an artificial container. Worth noting is that, as temperatures rise, the “extrinsic incubation period” — or the period after which the virus can infect a person from the mosquito host — is shorter. This implies that any infected mosquitoes present in the current hot weather conditions have a greater chance of passing on the virus to humans.

Likewise, any unseasonal rain could also cause such a rise in disease figures. A host of factors such as these can play a role in small scale outbreaks. Dr Nawal notes no changes in mortality rate for the “new strain”. This further indicates that the outbreak is simply the same strain of virus occurring at a higher rate due to environmental factors

Elsewhere in the country figures have remained similar to last year. Odisha recently reported an earlier than expected first death of the year resulting from dengue. The patient was identified as Pratima Sahu, 48, of BDA Colony in Bhubaneswar.

This news has sparked a localised panic though can be explained away when looking at Sahu’s medical record. Sahu was identified as being diabetic and under treatment for hypertension. Doctors suggest that the dengue infection worsened her condition, resulting in her death.

Last year’s first dengue death in Odisha was reported on August 9 from SCB medical college hospital at Cuttack. This earlier first death is likely just due to comorbidity. Further dampening fears, figures for this year’s dengue cases are similar to last year, with 48 reported cases this year compared to 45 last year to the same date.

“By limiting the effects of climate change, millions of dengue fever cases could be prevented”

The theory states that as temperatures rise, more and more areas of the globe become potential breeding areas for mosquito populations. In turn, this puts populations at risk that would previously not be exposed to mosquitoes, leaving them prone to diseases such as malaria and dengue fever.

By limiting the effects of climate change, millions of dengue fever cases could be prevented.

According to research conducted at the University of East Anglia, limiting global warming to 1.5 degree Celsius could avoid around 3.3 million cases of dengue fever per year in Latin America and the Caribbean alone. Alternatively a global warming trajectory of 3.7 degree Celsius could lead to an increase of up to 7.5 million additional cases per year by the middle of this century.

The increase in dengue fever cases in Jaipur is likely due to environmental conditions. Despite doctors claiming a change in the virus, a health department official denied that they have sent samples to National Institute of Virology for its confirmation.

It is accepted that dengue cases are being reported in higher numbers outside of normal seasonal cases. However, without genetic testing the claims of a new strain will continue to be unproven.