You are here: Home / Featured / Government to monitor child health and education through ID numbers

The government has announced plans for a central ID system for children that will track their progress through the education system and record health data. 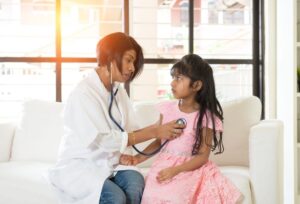 Government officials claim the programme will encompass a number of government ministries. The ministries that would be involved include human resources development, women and child development, health and family welfare, social justice, minority affairs, tribal affairs, and skill development.

This would, in theory, allow sharing of data and evaluations to be performed across multiple departments using multiple different variables. This data could then be used to assess the performance and impact of various other government initiatives.

Senior government officials have said the system would track of a child’s progress from birth to the point that they obtain a job. After this, the unique ID number associated with the child will be carried over to India’s Aadhaar system.

As with Aadhaar, concerns have been raised that the system would be intrusive and intrusive. Officials have said that they are trying to limit concerns by not requiring the addition of any biometric data to the system, as is the case with Aadhaar.

Controversy surrounding the new system is inevitable simply due to the concept of mass scale collection of data regarding children. “Simply masking the Aadhaar details may not be enough,” says Rahul Matthan, partner at law firm Trilegal. “Given the sensitive nature of medical data the government should be especially careful, particularly since we don’t have privacy law in the country right now.”

Issues may also arise due to the necessary data collection starting point of birth in a hospital or medical facility. In many cases — particularly in rural communities with limited access to these healthcare facilities — babies may be born in a home setting, and therefore not added to the database.

If some form of census to include babies born outside of a healthcare setting is not included, many children may fall through the gaps in the system. This could limit employment opportunities for those who need to verify education details in the future.

India has considerable issues with childhood mortality. UNICEF data indicates that, in 2016, 600,000 children died within their first month of life. The country’s neonatal mortality rate was recorded at 25.4 deaths per 1,000 live births placing it 12th among 52 low-middle income countries and 28th overall.

Despite controversy, the new ID system could be used to identify gaps within the healthcare system. This could allow government departments to focus resources on the areas most affected by diseases and issues contributing to high rates of childhood mortality.