Dr Asima Chatterjee, the first Indian woman to receive a doctorate of science from an Indian University and a major contributor in the fields of organic chemistry and phytomedicine has been honoured on the 100th anniversary of her birth by a google doodle (the image on the google homepage). 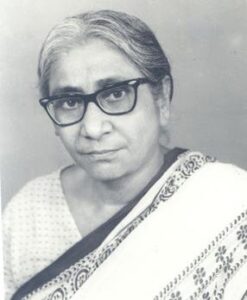 Dr Chatterjee was born on September 23 1917. In the 1930s, it was almost unheard of for a woman to be taking a bachelor’s degree in chemistry but Chatterjee did. She completed a doctorate of science in 1944 at the University of Calcutta.

Her most noted work was with vinca alkaloids. These alkaloids are derivatives from the Madagascar periwinkle plant, and have shown to have properties that slow, or even stall the replication of cancer cells. As such, these alkaloids have seen wide use as a chemotherapy agent that continue to be used to this day. This alone is a considerable achievement, for a naturally derived medicine to still hold such an important use after so many years highlights the importance of this discovery.

The Indian government presented Dr Chatterjee with numerous accolades, including some of the highest awards like the Padma Bhushan, the S.S. Bhatnagar award, the C.V. Raman award, and the P.C. Ray award. Chatterjee was also appointment to the Rajya Sabha between the years 1982 and 1990.

Renowned across universities globally, Dr Chatterjee published a significant number of papers documenting the medicinal properties of various plants across India. In 1975 she became the first woman appointed as the general president of the Indian Science Congress.

The legacy left behind by such a well accomplished scientist lies beyond the extent of medicine. Dr Chatterjee is noted for being the first female to be appointed to several different positions. She broke a stereotype that was at the time particularly solidified in India that science was a pursuit reserved almost exclusively for men.

Though India still has a long way to go to ensure gender equality, Dr Chatterjee has gone far beyond proving that Indian women are more than capable of being accomplished scientists.