You are here: Home / Featured / A climate of pollution in Hyderabad: Pharma to blame? 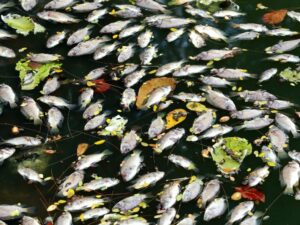 Hyderabad’s pharma boom is having a devastating effect on the environment. Five major pharmaceutical companies have been charged with making water and the atmosphere toxic.

The Telangana State Pollution Control Board (TSPCB) warn that the state capital’s emerging pharmaceutical industry faces ‘stringent action’ because of pollution from pharma plants. This follows the death of 230,000 fish due to chemical toxicity in Gandigudem Lake in the city’s Patancheru industrial district.

‘Rotting fish sprawled on the banks’

Toxicity in the lake is being blamed on discharge from the Kazipally Industrial Estate. The estate is home to a number of pharmaceutical plants including Mylan Laboratories and Aurobindo Pharma.

Heavy rainfall in the wake of a cloudburst is believed to have washed chemical waste from the estate into the lake. The pollution leaves ‘rotting fish sprawled on the banks and floating on the lake’, reports the Times of India. This is at the expense of local fishermen.

Chinta Jardahan, president of the local Fishermen Cooperative Society, told the ToI that Rs 25 lakh of harvest fish and seedlings had been released in the lake. Pharmaceutical waste is thought to have killed between 70 and 80 percent of the fish.

‘We will find and book the guilty’ 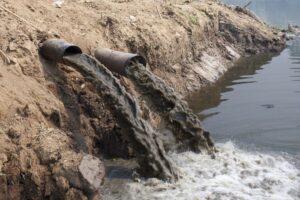 Investigations note that the dissolved oxygen within the lake had fallen to levels that are lethal to the local fauna. This, along with the chemicals dispersed into the lake is assumed to have caused the deaths. However, to what extent the chemical spillage caused the reduction in dissolved oxygen is unknown. Another factor involved is the excessive growth of algae, which locals noticed as water had turned a cloudy green.

An official complaint filed with Ameenpur police by the cooperative has seen five pharma companies charged under Sections 277 (fouling of public water) and 278 (making the atmosphere toxic to health) of the Indian Penal Code. They are Aurobindo, Hetero Drugs, Ltd., Mylan, SMS Pharma and Sriram. However, the case does not necessarily stop there. One inspector involved in the case says ‘there are 30 industries in the cluster…we will find and book the guilty.’

A pharmaceutical hotspot – at a price

Hyderabad has become a pharmaceutical hotspot of India in recent years, adopting the name the ‘Genome Valley of India.’ A 2016 report by the India Brand Equity Foundation estimates a fifth of India’s pharmaceutical exports come from the city.

This newfound prominence has come at a price, one that has proven ruinous to communities, ecosystems and livelihoods. According to the ToI, it means “a daily battle for healthy existence that close to five lakh Hyderabadis, shrouded under a thick blanket of poisonous gases.”

A little over forty miles away, pharma waste in the Edulabad Chevru lake leaves residents of Edulabad in a similar predicament. There, everything seems affected by the pollution. Dead fish wash up in droves. At least four lakh were recently washed ashore after heavy rains.

Not only this, the soil has become flammable; residents are afflicted with migraines and skin irritation; children are born with deformed teeth; and the amount of milk produced by cattle who drink from the lake has been decimated. Across the city, heavy rains and flooding often means that there is no escape from the pollution: not even in one’s own home.

A failure of large proportions

The failures contributing to this state of affairs are manifold. Pharmaceutical companies bear the brunt of the responsibility for failing to properly dispose of waste. However, the state’s sewage system fails to curate the water supply properly. Each day, 1,800 million litres (MLD) of wastewater is produced. Of that, just 715 MLD can be treated. The rest is discharged into the Musi river, which directly flows into, among others, the Edulabad Chevru and Gandigudem lakes.

A target of December 2017 has been set to do this. With two months to go at the time of writing, it looks unlikely that such a target will be met.

26 years of campaigning for change

Environmentalists in the state have reportedly been campaigning for change ‘over the past 26 years.’ They have obtained more than forty court orders and numerous directives from the state’s pollution control board to this effect. However, the lack of a special agency to implement the orders means that such orders go without enforcement – and offenders go without punishment.

The case in Gandigudem is promising, with the offending companies on notice. However, as noted by resident Shankar Goud, “a fine will not be enough. The violating companies must be shut down.”

The likelihood of such a lucrative industry being shut down, no matter how many people suffer because of their polluting practices, is slim. As such, the legal repercussions of Gandigudem Lake are looking less promising and more of a minor exception to the rule.