You are here: Home / Featured / Poultry farms: Adding to the drug resistance epidemic? 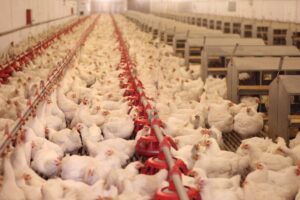 In the expert opinion of Ramanan Laxminarayan, director of the Center for Disease Dynamics, Economics & Policy, Washington DC and New Delhi, this is certainly the case. According to Laxminarayan, the majority of the poultry feed used in India is medicated with antibiotics, used to promote growth and limit disease.

A study, to which Laxminarayan contributed, published in Environmental Health Perspectives analysed the prevalence of antibiotic resistance of E.coli amongst 18 poultry farms in the Punjab region. It was found that the unregulated use of pharmaceutically relevant antibiotics in small doses in poultry farms significantly raised the prevalence of antibiotic resistant bacteria in the chickens upon testing with 11 different antimicrobials.

This study has several implications. Firstly, the heightened presence of antimicrobial resistant E.coli in food products poses health risks in its own right. With E.coli previously implicated as a cause of potentially fatal diarrhoea in India this alone should be cause for concern. Diarrhoea killed more than 100,000 children under five years in India in 2015.

E.coli grows very well in laboratory conditions, making it easy to study. So, it serves as an indication of the potential levels of antibiotic resistance in other bacteria. The results of this study  may therefore translate to other conditions more common in humans, implying that any number of other diseases may be becoming resistant to antibiotics due to low level distribution of antibiotics in livestock feed.

Evidence of the progression of antibiotic resistance can again be found in the E.coli bacteria. The presence of an enzyme, New Delhi metallo-β-lactamase (NDM-1) – named due to it being first isolated in a Swedish patient of Indian origin – makes commonly found E.coli and K.pneumoniae bacteria resistant to 26 different antibiotics. Amongst these antibiotics are carbapenems, a class of strong antibiotics used to treat multidrug resistant infections.

Poultry farms producing animals for meat (or broilers) were found to have a far higher rate of antibiotic resistance in the study in comparison to farms dedicated to egg production. This was found to be due to antibiotics commonly used in the food to maintain the health of the poultry and improve growth rates, often used as a cheap alternative for proper hygiene.

“Misuse of antibiotics in animal farms endangers all of us because it multiplies drug resistance in the environment,” says Laxminarayan.

Growing rates of antibiotic resistance are presenting a huge problem both in India, and globally. This is a situation that requires immediate attention, as it could present a future global health crisis in which most current used medicines become ineffective. Tighter regulation of antibiotic application could reduce the onset rate of antibiotic resistance. This would however require tight monitoring of farms and livestock, which could be difficult to achieve in India. Another potential avenue that may be an easier solution is to monitor the contents of the livestock feed directly.