You are here: Home / Access to Healthcare / Diphtheria and the importance of full course vaccination

Has limited access to medications caused a preventable disease to continue to claim lives in India? Diphtheria is a disease that has largely been reduced in a number of developed nations; in India however diphtheria still persists. Explanations for this typically dwell on the lack of access to both medical treatments and to  the vaccinations that would prevent the disease occurring. 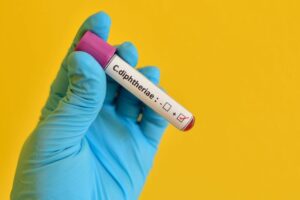 Diphtheria is an infection caused by the Corynebacterium diphtheriae bacteria. It is highly infectious and spread by human to human contact via sneezing and coughing. The bacterial infection affects the respiratory system, causing fever like symptoms and killing healthy tissue due to the bacteria secreting a toxin. This dead tissue forms a thick grey “pseudomembrane” in the respiratory system that can lead to breathing complications that can be fatal.

With treatment, one in ten patients still die; without treatment (involving the use of both antibiotics and antitoxin), this rises to one in two patients. This demonstrates the importance of the vaccination. Prevention is a far more favourable option than treatment as, even when provided medicine, death may still occur.

After children were admitted to the clinic with severe symptoms, including swelling of the neck, there was an urgent outreach to different sources to acquire the medication  All were unsuccessful. Repeated statements from sources cited a shortage of anti-diphtheria serum nationwide.

Small scale outbreaks of diphtheria occur nationwide. Recent reports show small numbers of cases occurring in a number of districts, Kerala for example showed eight cases across June, Kochi district had only two cases in April. The small number of cases disguise the potential lethality of this preventable disease, leading to it not being prioritised for treatment.

Experts blame the continued presence of the disease on lack of trust for vaccination. Though once eradicated in Kerala, the disease is now resurging. Health officials suggest a combination of the disease no longer seeming a threat, as well as the influence of vaccine sceptic religious and community leaders, particularly among the Muslim community.

This provides yet another example of how vaccine sceptics, preaching unscientific statements about vaccines are endangering lives. For a disease that had previously been eradicated to reemerge implies vaccine coverage has fallen, this reduces the benefits of herd immunity (the concept that with increasing numbers of vaccinated people, there are less available hosts for a disease) and can allow the disease to once again spread. Due to shortages of treatment supplies for diphtheria, this is a dangerous combination.