You are here: Home / Featured / Playing a guitar during brain surgery

A seven hour long brain surgery has been performed in India, all while the patient played his guitar. The first surgery of its kind in India, the procedure was hailed as a landmark for Indian neurosurgery. 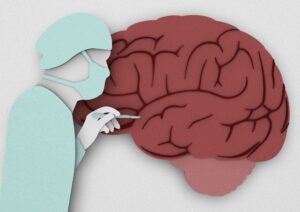 Abhisek Prasad, 37, suffered from a neurological condition called musical dystonia. The condition involves involuntary muscle contractions associated with specific movements. In the case of Prasad, this caused the contraction of his fingers whenever he attempted to play his guitar. The condition is typically caused by rigorous overuse of a muscle group.

The decision was made to keep Prasad conscious during surgery as it would allow him to provide constant feedback. By allowing Prasad to play the guitar while the surgery was being performed, the areas of the brain affected by the condition could be more readily identified.

The procedure involved the fixing of four screws to the skull to attach a frame to hold the skull open, before boring of a 14mm hole in the skull under local anaesthesia, which allowed doctors to insert a specialised electrode into the brain. Dr. Sharan Srinivasan, head neurosurgeon at the Bhagwayn Mahaveer Jain Hospital in Bangalore, then performed “radio-frequency ablation”, a technique that involves using radio frequency currents to destroy the areas of the brain that were triggering the abnormal neuronal activity.

Dr Srinivasan learnt the technique in Japan, and is the first in India to successfully perform the procedure. On a global scale, this is the eighth time the procedure has been performed on a conscious patient.

Dr Sanjiv C C, a senior neurologist from the University of British Columbia, mentioned the importance of keeping the patient conscious, “This problem occurred when he tried to play the instrument and real-time feedback was important for us to ascertain the exact location of the target to be repaired.”

The operation was a success, Prasad himself saying that after the sixth burn from the radio frequency currents, the cramps in his hand were relieved and he was able to play his guitar normally even on the operating table.

Dr Srinivasan praised the success of the surgery, saying “live brain circuit surgery” in India was a huge milestone. He notes that people suffering from musical dystonia may feel depressed and confine themselves to solitude. Dr Srinivasan hopes to reach out to patients in this kind of situation.

Prasad has been overwhelmed by the success of the operation and aims to release an album next year.