You are here: Home / Access to Healthcare / India’s growing population: its effect on healthcare 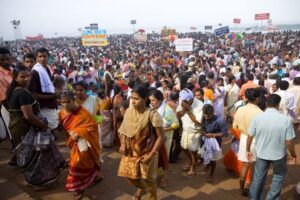 The UN estimates that India will surpass China as the world’s most populous country in around 14 years, at which point the population will number 1.45 billion. Unlike China, which has attempted to implement controversial governmental strategies such as the one child policy, India’s population is still rapidly growing.

India is currently the second most populous country in the world, surpassed only by China. Currently the population stands at 1.33 billion, with China leading at 1.43 billion. To illustrate the sheer size of the population of these countries, the next leading population is that of the United States, at 324 million.

More than half of Indians of reproductive age do not use modern contraceptives. This encompasses 45 million women. Of these, 31 million use no contraceptives at all and 14 million use unreliable traditional methods. Despite more contraceptives being available for free under the family planning programme, the proportion of Indians making use of contraception has actually fallen in the last decade, from 56.3% in 2005-06 to 53.5% in 2015-16, according to data from the National Family Health Survey (NFHS-4).

The vast population of India offers a number of pros and cons. A gargantuan workforce, with a high number of young workers presents India enormous economic potential, particularly with the rise of highly efficient modern manufacturing techniques. India currently holds around 445 million students currently in education, this makes India a potential hub for research in higher education, as well as having a potentially sizable highly educated workforce.

However, there are drawbacks to such a huge population. India is a country of vast inequality; there are considerable differences in the level of treatment available between different sectors of the population based on a number of factors.

Better quality healthcare is available to the rich, with the poor often facing a struggle to afford treatment. Another significant divide lies in the disparity of the healthcare infrastructure between rural and urban locations. While India meets the global average of physicians in the population, the availability of doctors is highly uneven.

Urban areas house around a third of the population, or around 442 million people. Despite bearing a minority of the population, urban areas hold 74 percent of the doctors. This leaves close to a billion people with inadequate access to healthcare. The private sector still dominates the Indian healthcare market and so many medical outlets that are available for people in rural areas are often out of their price range.

An issue that India will need to address in the coming years that will be made more severe by an expanding population is that of healthcare expenditure. India is amongst one of the lowest countries in the world by healthcare expenditure, currently spending 1.2 percent of GDP. The National Health Policy 2017 aims to raise spending to 2.5 percent, still lower than the vast majority of countries. This may alleviate some of the healthcare inequality within the country, though with a rapidly expanding population, a greater commitment may be needed to support the millions in poverty without access to medical care.