You are here: Home / Featured / Thyroid disorders affect over 30 percent of Indians

Thyroid disorders are far more prevalent than had previously been assumed claims a report published by global diagnostic chain SRL Diagnostics. India lacks an effective national policy to tackle the scope of the issue, the authors say. 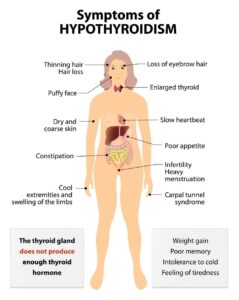 Reports that include subclinical hypothyroidism, such as the results from SRL Diagnostics have suggested the condition is common amongst the Indian population, suggesting that it affects as much  as 32 percent of the population.

The study was conducted on 33 lakh adults across India over the 2014 to 2016 period. Three markers of hypothyroidism were tested for: TSH, T3 and T4. The results showed  that hypothyroidism was more prevalent in northern India than in the south. Though reasons are not given for this, there are known genetic risk factors related to thyroid conditions, which would suggest these genes are more common in north Indian populations.

cause contrasting side effects, causing a high metabolic rate that leads to significant weight loss, a rapid heart rate and elevated blood pressure.

“There is a significant need for us to reach out and make people aware of the causes, symptoms, treatment and importance of testing for thyroid problems. Women are a key audience because there is a higher incidence of thyroid disorders amongst women than men”

With thyroid conditions being so prevalent, especially amongst pregnant women, public awareness campaigns or the implementation of governmental policies regarding the condition would likely greatly benefit public health. As the symptoms are easily mistaken for those of other conditions, greater knowledge would ease the process of diagnosis.