You are here: Home / Featured / Therapies to treat the rising numbers of MS patients

There has been a significant increase in the number of patients diagnosed with multiple sclerosis (MS) in India in recent years. This may be because the disease is more prevalent or the result of better understanding and diagnosis or both. To cope with the rising number of patients, many believe India needs to rethink its policies of research and treatment of the condition. 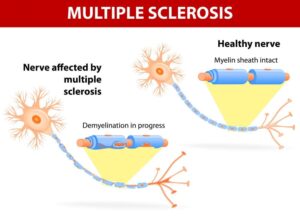 MS is a neurological condition, affecting nerve cells in the brain, spine and optic nerve. Damage to the elongated section of the neuron (nerve cells) called the axon is the hallmark characteristic of the disease. The elongated axon allows  neurons to signal across the body.

The axon is surrounded by a myelin sheath, a fatty substance that both protects the axon and electrically insulates it to allow for faster signalling. Damage to the myelin sheath can impair axonal signalling and so inhibit brain function. The symptoms of MS arise as the body’s immune system starts to attack the myelin sheath.

The underlying causes of MS are unclear, there is evidence to suggest there is a genetic basis to the disease, although multiple genes might be  implicated. The genetic aspect does not fully explain the symptom however, and it is believed there are environmental and lifestyle factors  that may increase the likelihood of developing the condition. In general, the further away from the Equator a person lives, the higher the risk of MS.

Though less common in India than places such as Europe, the disease is no less life changing to those who develop it. Symptoms can include vision problems, balance problems, dizziness, bladder problems, stiffness and/or spasms, as well as memory and speech impairment.

Though the disease cannot be cured, the symptoms can be managed. It is treatment policy that is drawing a degree of criticism. The All India Institute of Medical Sciences (AIIMS) has urged Prime Minister Narendra Modi to push for the prescription of Azathioprine instead of other FDA approved medications.

In their own independent analysis of various MS medications the AIIMS noted the Azathioprine was often not only more effective at managing the symptoms, but the potential reduction in cost for the consumer is considerable. At Rs 10,000 per year, the drug is significantly cheaper than other MS medications on the market, typically costing three lakh per year.

Azathioprine has been implicated previously to aid in managing the symptoms of MS, but in many countries, such as the UK, it is not a standard treatment and is often reserved for severe cases. This is due to the potential side effects of the medication. As an immunosuppressant it has been shown to reduce white blood cell count, potentially making a person prone to infection. It can also induce anaemia and cause liver damage.

Other medications are currently undergoing trials, both worldwide as well as in India. Ofatumumab, a chemotherapy medication, has shown to be effective in medicating the symptoms of MS, though up until this point has not undergone full human trials for this purpose. Currently it is being tested in a number of countries. In India these trials are being performed by seven institutes, including AIIMS.

These trials will be conducted to compare the efficiency of the potential medications to current, widely used medications for MS such as beta interferons and copaxone. These medications are in current use globally and operate through mediation of immune response.

For the estimated one lakh patients suffering from MS in India it is of the utmost importance that any treatment capable of managing the symptoms be affordable. Kameshwar Prasad, Head of Neurology, AIIMS says on the matter

“In India affordability is a prime concern for patients. Azathioprine is effective or possibly more effective than Interferons…This hopefully will serve as a big relief for those who cannot afford more expensive treatment options,”