Hospitals in India are finding a myriad of different ways of using 3D printing technology to provide more advanced and reliable healthcare. The usage of this technology are incredibly varied, from 3D printing skeletal structures to the creation of replica organs for use in trial run surgeries. Could 3D printing be an emerging medical field with the potential to revolutionise healthcare in India? 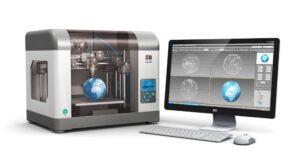 One six month-old child suggests that changes could be far-reaching. According to a recent story in India Today, he had  a hole in his heart. Doctors were unsure about whether or not to go through with the surgery as they deemed his chances of survival to be small. However, using a CT scan of the child a reconstructed model of the child’s heart was made, allowing doctors to more accurately investigate and plan the needed surgery. A patient who might have been unfit for surgery was successfully operated on because of information provided by the 3D printing technology.

With the use of 3D printing technology, a prosthetic limb can be custom made to fit the individual patient. This is a relatively simple procedure that would involve the taking of measurements and the alteration of the digital prosthetic to customise it before printing. Not only does this have the advantage of avoiding surgery, it also produces a custom fitting, and so a more efficient and comfortable prosthetic.

Even bodily structures as complex as a spine can be reproduced. A 32 year old woman from India contracted tuberculosis. The disease typically affects  the lungs, but  in her it affected  spinal tissue due to a lowered immune system, resulting from infertility medication. The tuberculosis worsened causing extensive damage to her first, second and third cervical vertebrae, meaning she no longer had any support between her skull and lower spine.

The resulting alteration of her posture was causing damage to the spinal cord, and doctors feared she could become quadriplegic or die if nerve damage caused issues with breathing. Surgeons at Medanta replaced the woman’s damaged first, second and third vertebrae with a 3D printed titanium implant during a 10-hour surgery. This was the first surgery of its kind in India, and a success that restored the woman’s ability to walk.

The potential for 3D printing technology in the medical sector is remarkable. Dr Mona Bhatia, additional director and head of Radiology at Fortis Escorts Heart Institute in Delhi says on the matter “The coming years will see it dominating the healthcare sector and becoming a part of architecture, engineering and consumer goods due to its high capability in design creativity and technology.”