You are here: Home / Access to Healthcare / Virtual reality in cancer therapy

Virtual reality (VR) technologies could play a key role in Indian medicine in the future.  For some patients in rehabilitation, Indian-developed VR systems are already taking the place of painkillers. It is just the start of a far-reaching transformation, experts predict. 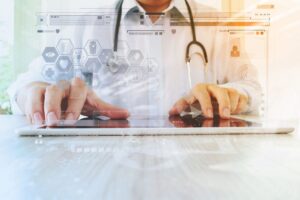 The story in the ET focuses on Pushkar V Kulkarni, a 21-year-old engineering graduate from Bengaluru. Due to a cancerous growth near his hip, Kulkarni required surgery to remove the two inch tumour. Like many others requiring invasive operations to remove tumours, he was left with difficulty in mobility and needed  physical therapy.

Physical therapy can often be an arduous process requiring hours of painful effort in order to regain proper function of limbs. Typically those going through physical therapy will be taking a considerable dose of painkillers. In the case of Kulkarni, he was not prescribed painkillers. Instead, he used virtual reality as a distraction while he attempted to regain function in his legs.

Bengaluru-based bone cancer specialist Pramod Chinder has been using VR therapy in the rehabilitation of patients with cancer for one-and-a-half years and has used this technology to treat close to 400 patients. The VR technology itself was acquired through Indian VR start-up company Loop Reality – in yet another example of digital tech startups in India finding new and innovative ways to improve the lives and care of patients through digital technology.

The usage of VR technology is used for treatment and rehabilitation of a number of conditions. Studies have shown usage of simple and cheap devices such as the Nintendo Wii in therapy for stroke victims. In comparison with a control group playing non-VR games such as cards, it was found that those on VR- assisted therapy show faster recovery times.

Kulkarni said that he could do much more during therapy with VR, “Without realising, I was doing 13 repetitions of the leg movement compared to five earlier.” While a patient focuses on the scenario of their choice played out in VR, they are not focusing on the pain.

VR extends even to the surgeries themselves. Tools are being developed to allow for doctors to perform practice surgeries, with the patient’s exact conditions replicated in VR. This has the potential to revolutionise surgery, with the ability to perform trial runs cutting the rate of errors during the actual procedure.

Many high profile companies such as Google and Facebook are investing heavily into virtual reality technology. A number of Indian companies are developing new products for the VR market, many of these will have medical applications. It could be the case that development of technology in the regions of AI and VR could revolutionise healthcare in the future, both in India and globally.