You are here: Home / Featured / Sharp rise in swine flu deaths in 2017 in India

2017 has seen a sharp rise in both the number of infected, and deaths associated with swine flu (H1N1) in India. Numbers vary depending on the source, with most stating around 345 as of May 7th. Higher estimates already exceed the total number of deaths for the whole of 2016, with the final figure for that year being 265. 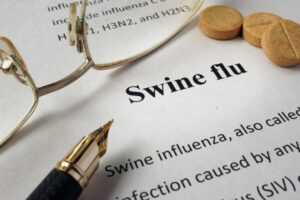 Anxieties are rising due to the possibilities of an outbreak similar to the one experienced by India across 2009 to 2010. During this major outbreak, which occurred at the same time as outbreaks in a number of other nations, 1,833 people were killed according to government data. Though current numbers are far lower than would be expected of an outbreak of this scale, cases are occurring further into the hotter summer months. Usually the number of reported incidents falls during the summer.

Typically, swine flu cases are more prevalent during the monsoon season. This year, cases have occurred both before and during the summer months. This is baffling doctors who have not yet established a reason for the virus’s early activity in the year. Many are now worried that the death toll will continue to increase, perhaps at a more rapid pace, as monsoon season begins.

Maharashtra has so far been the worst affected state, with 165 deaths occurring due to the flu (as of 5th May). The next highest number of deaths has occurred in Telangana and Andhra Pradesh, 16 and 13 respectively. The implication is that Maharashtra is the epicentre of the outbreak.

A possible explanation for this years outbreak is the newly discovered “Michigan strain” of swine flu. This strain was first isolated in Maharashtra and so is consistent with the potential for Maharashtra being the epicentre of the outbreak. It is thought that current vaccines are ineffective against this strain, which would also account for the unusually high number of deaths this year.

The World Health Organization, which last reviewed the Indian flu situation in March, has suggested that the vaccination for the Michigan strain be distributed across the 2017 to 2018 period.

This leaves many without any immunity to the newly discovered strain until the vaccine has been rolled out. With monsoon season still to come India may well see further outbreaks.