You are here: Home / Featured / Mosquito-borne disease on the rise; WHO calls for new approach

Deaths from infectious mosquito-borne diseases such as dengue and chikungunya are on the rise in India, with an uptick in infections since the beginning of September.

Seventy fatalities from dengue are reported across the country, including eighteen deaths in Delhi where there are 1,158 infections according to a Times of India report, citing data from Municipal Corporation and the All India Institute of Medical Sciences (AIIMS).

Chikungunya has had a lesser though still profound impact, with 14,656 infections nationwide, including 9,427 incidences in the state of Karnataka alone. 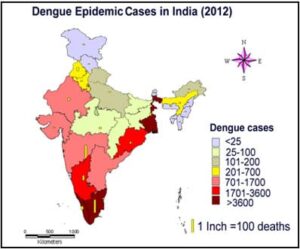 These figures come in the wake of an interjection by the World Health Organization (WHO), which has implored India to engage with the private healthcare sector in an effort to better combat both dengue and chikungunya.

The current figures are almost certainly an underestimation on account of the fact that they exclude figures from the private sector, which provides an overwhelming majority of the country’s healthcare services. This was noted by Henk Bekedam, the WHO’s representative to India, who stressed: “it is important that information from private hospitals and facilities is captured and well-represented for better understanding and estimation of the national disease burden of these infections.”

The WHO has also called for investments into disease surveillance programmes to enhance their efficiency and efficacy, including the use of innovative technologies such as genetically modified mosquitoes.