You are here: Home / Featured / High-Tec hope for Healthcare: Could start-ups be the revolution India’s healthcare sector needs

Recent controversies such as the tragedy of an Odisha man forced to walk 10km whilst carrying his wife’s body over his shoulder (pictured) after the state were unable to provide an ambulance have intensified calls for the healthcare sector in India to be rejuvenated to accommodate the demands of the population. 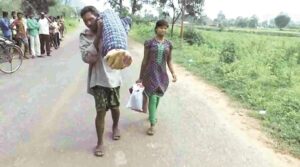 It has been suggested that start-ups could play an integral role in healthcare in India, addressing the needs of those with limited or no access to proper healthcare facilities, particularly those in rural communities.

An article in Business Insider highlights a study co-authored by the Federation of Indian Chambers of Commerce and Industry (FICCI) and KPMG and unveiled at the 2016 FICCI HEAL conference revealed that between six and eight percent of investments made in B2C (business-to-consumer) start-ups in India are made in healthcare.

The report – entitled “Indian Healthcare Start-Ups – An inside look into funding” –aimed to, in the words of Business Insider India, “evaluate the role and need for Indian healthcare start-ups in India, their evolution, funding, future, and challenges”.

A recent analysis of government data by IndiaSpend found that the country was 500,000 doctors short of meeting the World Health Organization’s (WHO) standard doctor-patient ratio of 1 : 1,000 – reinforcing the findings of a parliamentary committee who, earlier this year, described a shortage of doctors as having “derailed both access to and quality of health care, especially to the vulnerable and poorer sections of the country.”

India’s public spending on healthcare amounts to less than 2% of GDP – among the lowest in the world.

Nandakumar Jairam, the chair of the FICCI Health Services Committee, stated that much-needed reforms in Indian healthcare could be accomplished by “fostering start-ups and entrepreneurship”  – a point seconded by KPMG Partner Nilaya Varma, who described the potential of start-ups to “emerge as new enablers of accessible and affordable healthcare services.”

Though noting the difficulties start-ups may encounter in acquiring funding, which can be exacerbated by slow growth in the industry, Varma expressed optimism that the Department of Industrial Policy and Promotion’s Startup India initiative could “bridge some of the challenges”, thus creating an “encouraging” and “conducive” environment for healthcare start-ups – whilst also expressing hope that further crucial backing could be obtained from private investors.