An unnamed source has told the New York Times that an Indian committee is to recommend 15 more compulsory licences for medicines that the committee considers of public health importance but to be too expensive in India. That, at least, is how we read the article on the 29th of December by Gardiner Harris, the Delhi corespondent of the NY Times.  (A compulsory licence — CL —  means that generic companies can ignore the patents secured by the company that discovered a medicine and can produce it freely, paying just a small royalty to the discoverer)

Harris has done a good job although he is not a specialist and it shows. For example, Harris says that Roche, “surrendered its patent rights [on a cancer drug, Herceptin] this year in large measure because it concluded that it would lose a legal contest in Indian courts.” It is true insofar as it goes: Roche would have lost its rights because its own lawyers forgot to file for the patent renewal on time, as many specialist Indian commentators have pointed out.  Harris also fails to note the several occasions on which health ministry officials (presumably including the anonymous one he spoke to) have recommended CLs but the government has decided against. India has a system with a number of checks and balances although Harris’s readers might think that these matters are decided by some administrative fiat in Delhi. Harris also ignores the battle within India over regulation of the generic copies of biological drugs such as Herceptin (so-called, biosimilars): companies such as Biocon (which he mentions) want very strict regulation that would keep the prices of generics high; other smaller companies want much more lax regulation that would, presumably, lower prices through more domestic competition but might limit India’s ability to export these products.

Overall, though, Harris is right. There will be more battles over patents and cancer drugs will be at the centre of them. Harris, though, ignores the biggest tragedy: we all know the solution and plenty of models exist for implementing it. We need a system of tiered pricing where the  countries with the highest per capita income (such as Saudi Arabia or the United States) pay the highest prices and the very poorest countries (such as Ethiopia or Zambia) pay the least. Countries such as India would be closer to the lowest prices while countries such as Brazil would pay something closer to the US prices. The pharma industry is, mostly, reconciled to this kind of pricing. It is the Brazilians who are fighting hardest against this kind of solution and, in international forums, India is usually on their side as it thinks it may get to benefit from the right to sell knock-off drugs at low prices to other middle-income countries. That is the real scandal.

The picture below accompanies the original NYT story 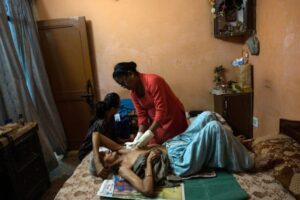