You are here: Home / Featured / Some important cancer drugs are still not available in India…

Lately there have been many pharmaceutical industry debates, articles about licensing and the Indian pharma industries in the news. Here is another article in Business Today and it provides a perspective from an oncologist Dr. Radheshyam Naik, who works at HealthCare Global (HCG), a Bangalore­based hospital chain that specialises in caring for patients with cancer, and sees about 150 cancer patients a month. While the pharma debate continues and we do not support any one side of the argument, it is important to ask what will happen to people who may need an essential drug on an urgent basis? 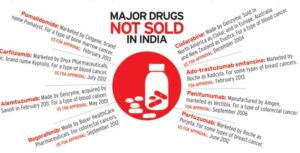 About one­ tenth of Dr. Naik’s patients have ailments for which drugs exist but are not available in India. Among them is a 45­ year­old software professional who has a kind of bone marrow cancer. The patient, who does not want to be identified, may at best be able to pull along for another six to nine months on drugs currently available. He is being treated with thalidomide but he needs pomalidomide which is not available in India. This new drug is life­extending, rather than life­saving, but even that can make a big difference as it would make things better for him for at least the next two years, by which time there may be another drug available that could either extend his life further or offer a new solution.There are more than a dozen drugs in important cancer treatment areas that are not available in India and this is a matter of concern for oncologists and cancer patients.

According to this article, every year, dozens of products are released in global markets. In 2012, the US Food and Drug Administration (US FDA) approved 39 new medicines, up from 30 in 2011 and 21 in 2010. Generally, 30 to 40 per cent of new drugs are for cancer. The availability of new drugs varies by country. Kewal Handa, former managing director of Pfizer India, who now runs healthcare advisory Salus Lifecare, says: “The launch of these products depends on several factors, including market potential ­ the number of people who can afford them ­ and the time taken for approvals in the country.” He says it takes anywhere from four months to two years for a new product to enter India.

There are several reasons why multinational drug companies may find India underwhelming. A spokesperson for Pfizer in India, while emphasising that India is an important market, says: “A lack of clarity and inconsistency in Indian regulatory requirements will lead to a shift of clinicaltrial placements to other countries with a developed, science­based and consistent regulatory framework. In the absence of clinical trials in India, it will become difficult to register new drugs leading to Indian patients being denied access to new innovative medicines.”For a foreign company to launch a drug in India, prior approval in the US or Europe is not enough. The company must conduct “confirmatory trials” in India, to establish the safety and efficacy of the drug on Indians. The requirement can be waived in a few cases, such as a national emergency, but a Parliamentary standing committee has raised questions about some instances of waiver. In the light of this, many in the industry fear that the regulator, the Drug Controller General of India (DCGI), may take a risk­averse stance and insist on trials in every case. DCGI G.N. Singh defends trial requirements, saying that they are necessary to ensure patient safety.

So far, the only way out is for doctors to write to the companies and get medicines delivered on a case­by­case basis, either under the patient’s personal import licence or through the drug manufacturer’s patient assistance programme but this is not always easy and patients may end up losing time.