You are here: Home / Featured / Study: Bangladesh Makes Strides In Healthcare Despite Poverty

A compelling article in the Asian Scientist  talks about Bangladesh and its lower infant mortality rates as compared to India, Pakistan and Nepal, despite its high poverty level.The London-based medical journal, The Lancet, recently published a series exploring Bangladesh’s surprising success, calling it “one of the great mysteries of global health.” 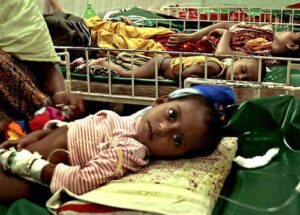 The paradox is that Bangladesh is a much poorer country than India or Pakistan. It has the lowest spending on healthcare in south Asia, (just US$27 per capita annually), and is extremely short of qualified doctors and nurses (only three doctors and three nurses for every 10,000 residents).And yet, compared with neighboring India, Pakistan and Nepal, it has achieved some impressive statistics. It has lowest infant and child mortality (51 per 1,000 live births), the highest vaccination rates (86.2 percent of children between one and two years old are vaccinated to internationally recommended standards), and the most extensive reach of family planning services (52 percent of married women under 50 now use modern methods of contraception). It also has the lowest maternal mortality rate (194 per 100,000 live births), despite relatively few women (32 percent) giving birth with a skilled birth attendant present.

The Lancet Series traced how these results came . With the government short of qualified officials, local NGOs filled the gap and the new government welcomed their help, and outside donors supported them.The result is one of the world’s most vibrant, successful NGO sectors. One of those organizations, BRAC (founded as the Bangladesh Rural Advancement Committee), now has more than 100,000 full-time workers and is widely ranked as the biggest NGO globally.

The main driver have been improvements in health care access, the growing participation of women in the work force and a “dramatic” change in their social status is another factor, said The Lancet series.

An important question was asked at the end of the article as to whether NGOs and private medicine  can continue to make up for a weak public health sector? Mushtaque Chowdhury, vice-chairman of BRAC and lead author of The Lancet series, told IRIN he thought the possibilities of the current NGO-dominated health model were not yet exhausted.

“I think the sky is the limit if the [right] environment is created. However, there is a need for new thinking… from government, NGOs and other sectors as we move to complete the epidemiological and demographic transitions.”