You are here: Home / Featured / India is “not quite polio-free enough” say celebrity writing duo #polio

As February 2014 approaches, India faces a wave of congratulatory coverage about eradication of polio.We reported yesterday that Bill Gates recently called it  the ”most impressive global health success” he has ever seen. The accomplishment is real and all the more impressive because there has been a worrying rise in polio cases in Pakistan in 2013 — an indication of just how clever the virus is at taking advantage of any instability. While the outbreaks started in remote tribal areas, Reuters reports, “there is evidence in tests conducted on sewage samples in some of the country’s major cities that the polio virus is starting to spread beyond these isolated pockets and could soon spark fresh polio outbreaks in more densely populated areas.”

However, India’s contrasting success is not so clearcut according to an article from this summer by the celebrated doctor-writer duo of Kalpana Swaminathan and Ishrat Syed (Kalpish Ratna) in Open Magazine.  It is powerfully written and it makes a forceful case. (The couple write regularly for Open and always live up to the very high standards of the magazine)

Kalpish Ratna write about a syndrome that causes the terrifying symptoms of paralysis characteristic of polio, Acute Flaccid Paralysis (AFP). Ratna say, “while every case of AFP may not be due to poliovirus, most are. So why not call it the polio it is? Shhhhhh! Polio is supposed to have been eradicated.” These AFP cases are mostly caused by the oral polio vaccine (OPV) that India continues to use although all industrialised countries have long since switched to injectable inactivated polio vaccine.  The official line, Kalpish Ratna write, “fails to mention that the people who actually deal with polio—paediatricians—are shouting themselves hoarse that we are not free of polio.” There are relatively few cases of vaccine-associated paralytic poliomyelitis (there seems to have been a peak of about 1600 in 2006) but, they write, “what if it were your child?” 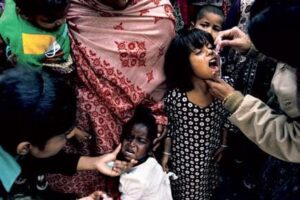